What is Lipoma Board? A forum and community offering information, alternative treatments, resources and support concerning lipomas, lipomatosis and other related conditions. Lipomas are fatty tumors under the skin.

Talk about anything and everything related to lipomas and related healthcare issues here.

I think it is still in it's sack as today it kinda felt like it was trying to form back together.
Top

Hi all, havent posted here before but would like to thank you drav for sharing your experiences, so I will in turn share mine.

I am in my 20s and have been getting these since I was 15. I had tried many different homeopathic/ organic remedies for years previously but realised that they were nothing but placebos and that "they feel a bit softer" was not going to help me, and that there are a disgusting number of charlatans around capitalising on peoples desperation (you know who you are).

As the years rolled on I reached the 50 plus lipoma mark so I decided it was time to take action. I went for a consultancy and was quoted around $130 per lipoma- out of the question.

After reading through this thread and watching that bearded guy on youtube, around 6 months ago I decided to try it out for myself and it has been one of the best decisions I ever made.

I have now removed around 15 of the most bothersome of these at home, one being the largest I had which was around 2 inches in diameter (golf ball size).

Now I am liberated and have no worries about the rest at all. I can now wear short sleeve shirts in public again, go swimming and play sports. I no longer care about what people think about them as I can remove them at any time.

Never be afraid to go after what you want, and if you want it bad enough you can take care of them yourself.

- Sterilise the area with injection swabs
- Make an incision, along the longest diameter of the lipoma - half the diameter of it
- Pop the lipoma out through the cut - can take some heavy manipulation
- Cut the stork/ flesh attaching the lipoma to the rest of your body
- Apply pressure for a few minutes to the cut to give it the chance to clot
- Sterilise the fresh cut with another swab
- Seal the wound with liquiband glue
- Apply plaster to catch any leakage

- A small (pea sized) lipoma takes ~1 minute to cut and stick the wound
- Large (2 - 4 grapes) ~ 5 - 10 mins
- Area around cut gets sore from liquiband glue for around a week after the procedure
- 1 "pod" of liquiband is enough to remove around 4 large lipomas
- People don't actually care about your lipomas as they are far to worried about what they look like
- I brought a pack of 10 sterilised scalpels and discard after a session of 3 or 4.
- I always had help with wiping away the blood so I advice having someone there with you

I would recommend trying at least one yourself. Remember: sitting on the fence is a painful place to sit.

Best of luck to everyone.
Top

Just a quick post to show some on my arm and how its healing; 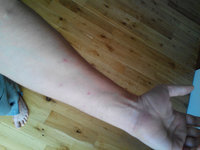 Pretty much most now all unnoticeable. None have returned so far, have not had any new ones. On this pic there are 4 visible, also the first lipoma I removed before I started cutting them up under the skin in July 7 months ago and the rest I think were removed roughly October 4 months ago.

I think Ive probably removed around 30 odd maybe even 40, its difficult to count as some on my legs/abs have vanished.

I even removed one on my rear, but the hardest one I removed was on my back as it was hard to do on my own in the mirror as i could barely get my arm to it.
Top

Thanks for the update. I must say you have managed to create minimal scars compared to the ones A PLASTIC SURGEON did to me many years ago (very well visible still, unfortunally).
Hi I'm Matt - the creator and owner of this site. I have dozens of small nasty lipomas all over. I've tried many treatments including surgery and Lipostabil injections. See my lipoma prevention supplement recommendations and please consider donating a small amount via PayPal (click the Donate button) to keep this site up and running. Thx!
Top

You are a master. You did it well. You must be sure you get them out completely, if you didn't they can grow up again in the same zone. I'm from Chile, and the surgery here it's not so expensive 100 dollars each lipoma, but I have more than 30, and I can't have 30 scars in my body it will be awful.
greetings to all!
Top

OK so its been over a year since I started removing my own. I've removed around 50 now maybe more i've lost count, as I've lost weight I have found more (18 stone now 15 stone), I've also removed a few on my back each side, wait for this, using a piece of lego attached to the scalpel, shocking I know!

Not had a single infection, every lipoma has been broken up under skin and squeezed out through a 3-4mm hole and glue, just leaves some bruising for a few weeks. Not one has come back. A few weeks ago we came back from CentreParcs and I was in the pool with my son for the first time in like 10+ years and you cannot notice that I have had any surgery. With the carbon steel blades, takes around 5 minutes per lipoma, some can take a little longer.

I do check the site from time to time.
Top

Thanks a lot Drav!
I, along i'm sure a lot of other people, appreciate your posts a lot!
This means there's another way out of this, and with enough practice we maybe can deal with this bullshit in this way if everything else fails. I have been taking Magnesium and Vitamin C for 9 months and the growth seems to have slowed down a bit. I still wanna try couple of other supplements and maybe at some point i'm gonna go at them with a scalpel. I just have several deep under the skin and on the back where I can't reach them myself, but that's another topic.

May I ask you to post pictures of your scars with good lighting etc. so we can see how visible they are? If that's ok with you of course.

OK these are a pic's of my left forearm, 3 lipomas removed. 2 pea sized 1 size of a grape. All removed with the clamp and scalpel.

vessels:
the legs and arms vessels are easy to see, but your torso... are you just eyeing it after you make the initial cut to avoid the vessels? and how easy is it to spot/avoid them as you are cutting(this would be one of the my main concerns)?

shell:
do you also attempt to remove the 'shell' (as seen in this video @5:05: https://www.youtube.com/watch?v=Rl-8wwclCTQ)?
from your info, i take it that you didn't and that the body just consumed it and that they didn't grow back inthatspot/intheshell again?
removing the 'shell' as done in that video seems to me a bit hap-hazardous in that you can't really see what's going on.

stalk:
is the fatmass-inside-the-lipoma connected to the 'shell' by a 'stalk'? (and that the stalk isn't attached directly to a vein/vessel?).
is there only 1 stalk?
if it is the case that the fatmass inside is connected to the shell by only a stalk, i wonder if cutting into it and twisting the fatmass until the stalk is broken/twisted (and then close it without removing the fat) is enough to cause it to die off ? ...for bigger ones might be impractical to try to remove the fat or if it is a hazardous location. granted, i would test it on a smallish one first (grape size maybe)..


for your next excision, i think we'd all be interested if you'd present a youtube vid (with running commentary)!
thanks for your posts thus far~

(sidenote: injection of ~1ml of a 30% saline salt sol. into a grapesized lipoma did nothing)
Top

I would do a youtube video, but my wife refuses to be in the same room as me when doing them and I only have my camera phone, I need both hands to remove them. But I think I have documented here all aspects and kit required.

But to recap I have my fingers (surgical gloves) or a clamp under the lipoma throughout, I push the blade straight through the skin into the lipoma - little or no pain, break the lipoma up under the skin with scalpel, that way it's easier to squeeze through a small hole, my fingers are always under the lipoma. The more i break up the lipoma under the skin, then less squeezing, the less the bruising. I then close the wound lightly with a little glue (liquiband), that's it, takes me now about 10 minutes each one.
Top

This was the video i saw that got me started. The differences are smaller blade, I always have fingers or clamp under the lipoma, i use ice, surgical gloves and glue, gloves wont leave nail marks on your skin. But pretty much everything is the same, breaking up the lipoma means it comes out easier from a smaller hole still relatively intact or sometimes in smaller chunks. At 6:47 on video alot are like that where you have long tissue strands or sack attached to the lipoma, im pretty thorough with the area to make sure everything is gone before closing. And before I start I try and gauge the size to what comes out and check the area to see if there are any veins close, which may affect where I put the blade. Ive probably removed in excess of 50 and still alive!

On my right arm, I have what I would say was a piece of long tissue where lipoma's have formed like a chain, already removed the big ones, I think I can feel some really tiny ones, like a quarter the size of a pea, that are now aggravated by a some squeezing. I think I can feel like 2 close together, anyway, i stumbled on a 4mm surgical hook on ebay; 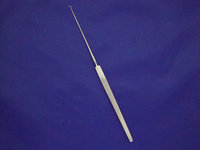 Ill cut and remove the first one, then try and fish the other one out with the hook, normally I would have to make 2 incisions. Will let you know how i get on. Obviously I will be very careful.
Top

You should video it and put on youtube...
Top

Just a quick update. The surgical hook arrived this am, however I tried to adjust the end slightly and the hook part broke off quite easily. I will try and find a smaller one, better quality.
Top

Users browsing this forum: No registered users and 4 guests

Please consider a donation to LipomaBoard.com